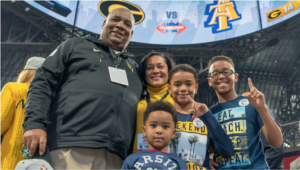 Broadway retries after seven seasons as the Aggies football coach. He will serve as a special assistant to the athletics director for the next six months. Broadway recently led N.C. A&T to its best season ever, finishing 12-0 with accolades that included winning the Mid-Eastern Athletic Conference title, the Celebration Bowl game and the HBCU national championship. In the process, the Aggies broke the school and conference records for wins and became the first MEAC and HBCU Division I-AA team ever to finish undefeated and untied.

“I am grateful to this great and historic university, North Carolina A&T State, for the opportunity to be its head football coach for seven years,” said Broadway. “I am grateful to two men I hold in high esteem, chancellor Martin and athletics director Earl Hilton, for believing in me and the direction I wanted to take this program. I am grateful to the players, they have made this a wonderful experience for me and my family.

I am grateful to what I consider a great coaching staff. They have conducted themselves with the upmost integrity and professionalism. And I am grateful to the very hardworking support staff we have here at North Carolina A&T.”

“I love the man not only for what he has accomplished during his time as our head football coach at North Carolina A&T, but also for who he is as a person,” said Hilton. “While we are losing one of the greatest coaches of all time, I love that he gets to go out on his own terms, a luxury not afforded to most coaches. He took our football program from being the laughing stock of the (Football Championship Subdivision) to being the envy of black college football and one of the premier programs on the FCS level. He did it with class and intelligence. He held everyone within his program to the highest standards of accountable. Rod’s work ethic is unmatched. I will miss him as a colleague but will always consider him a friend and a confidant.”

Hilton on head coach Sam Washington: “Coach Washington holds many of the same characteristics as coach Broadway. We have believed for some time that coach Washington has the skills, temperament and leadership qualities to be a collegiate head coach. We are confident the trajectory of the football program will remain on a winning path with coach Washington at the helm. We are eager to see him do well in a position he richly deserves.”

Under Washington’s leadership as the Aggies defensive coordinator for seven seasons, the Aggies have consistently produced one of the best defenses in the nation. The Aggies have been the MEAC’s No. 1 total defense and scoring defense four times in the past seven years. They have had the No. 1 total defense in the conference three straight seasons. N.C. A&T has also had the No. 1 rush defense in the conference six times in seven years. Nationally, the Aggies defense has never ranked lower than 20th under Washington including a No. 4 ranking in 2017. The Aggies had the nation’s best run defense in 2012.

“It has been an honor and privilege to serve under coach Broadway both at Grambling State and North Carolina A&T,” said Washington. “I could not ask for a better friend and mentor than Rod Broadway. What I saw him accomplish at North Carolina A&T is nothing less than remarkable. Following a legend is never easy, but coach Broadway has taught me so much over the years, I am poised to continue having success in Aggieland. I want to thank chancellor Martin and Mr. Hilton for what is an awesome opportunity for me and my family. Our coaching staff will stay intact for the most part, so we are ready to get to work.”