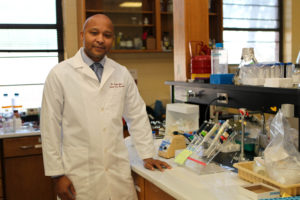 An $8.5 million National Institutes of Health grant will enable Tuskegee University researchers to improve our understanding of why diseases — such as cancer, obesity and HIV — disproportionately affect minority populations, and how targeted community education programs can reduce the perv asiveness of these diseases.

Research funded by NIH’s National Institute for Minority Health and Health Disparities (NIMHD) program will help researchers in the university’s multidisciplinary Center for Biomedical Research examine the molecular, genetic and epigenetical determinates that contribute to the ferocity of specific diseases among the African – American community.

“Through this NIH – funded research, we will gain a better understanding of the health differences that exist among various races and sub – populations,” said Dr. Clayton Yates, a professor and director of the Center for Biomedical Research. “This in turn will enable physicians in the future to have a better understanding of which therapies will be more effective among minorities, as well as who the most vulnerable and underserved segments of our population are.”

One particular disease on which the team will focus initially is prostate cancer. Hist orically, African – American men have had the highest incidences of prostate cancer for any racial and ethnic group in the world — more than two – thirds higher than white men. African – Americans also have the highest mortality rates and shortest survival rates of any racial and ethnic group in the U.S. In studying prostate cancer, the team will evaluate the heritable and environmental factors that influence the rising rates of the disease among African – American men. During the five – year grant funding period, th e team will expand its focus on other diseases that plague minority populations.

Dr. Shaik Jeelani, Tuskegee’s vice president for research, heralded this initiative as being forward – focused on the future of health care and the medical needs of some of society’s most underserved individuals.

“A common theme for much of the research and outreach work done by Tuskegee University faculty centers around better and equitable access to quality health care for everyone,” Jeelani said. “This grant will continue ou r mission of focusing our research on the nation’s most prevailing health issues — especially those that threaten the well – being of minority populations.”

In addition to its medical focus, the project also will include engaging local communities as partners through town hall meetings that increase awareness of diseases like prostate cancer that disproportionately affect African – Americans, as well as how best to mitigate their risk factors. Dr. Lonnie Hannon, an associate professor of sociology in the College of Arts and Sciences, will partner with the Southern Christian Leadership Foundation and other community groups to educate, as well as learn from, the communities where disease rates are higher than average.

“It’s critical that we take the knowledge we acquire from research and use it to empower individuals by improving their access to and participation in key institutions, such as health science research,” Hannon said. “By participation in structured and unif ied engagement, we can leverage our intellectual resources in a manner that builds trust in these institutions. This is the hallmark of engaged empowerment, a concept that I have been developing for some time now. Engagement leads to participation. Partici pation leads to access and subsequent increases in trust.”

Tuskegee University is one of the only seven research centers at minority institutions (RCMIs) funded in this National Institute for Minority Health and Health Disparities grant cycle. Others include Florida International University, Meharry Medical College, North Carolina Central University, Northern Arizona University, the University of Hawaii at Manoa, and the University of Puerto Rico Medical Sciences Campus.

“I am very proud that our Tuskegee team is among this list of outstanding institutions dedicated to serving and enhancing the health care services available to minority populations,” said Interim President Dr. Charlotte P. Morris.

This grant also will have long – term benefits for Tuskegee ’s research infrastructure, according to Samuel. Funding will strengthen the biomedical research capacity of the university’s Center for Biomedical Research by augmenting faculty research competitiveness and training the next generation of biomedical researcher focused on health disparities and community engagement.