Three luxury buses full of museum curators, CEOs, founders and representatives arrived on Hampton University’s campus Friday night, August 10, 2018, to celebrate and culminate the week-long 40th Anniversary Conference of the Association of African American Museums during the “Summer Breeze: An All White Party.”

After a while, the visitors, dressed all in white, walked to the University Café to continue the celebration with food, drinks, music and dancing. “I feel like the red carpet has been rolled out, the food is wonderful, the school band was out here and it’s just our way to wrap up the conference and a chance for everybody to show their gratitude, the Host Committee, the Board, everyone who comes together for this wonderful networking and professional development opportunity,” said Brian Carter, Board President of the Association of African American Museums.

The Mayor of the city of Hampton, Donnie Tuck, was also there to welcome the attendees. “We just want to welcome you, we have a great city and I think about the visionary leadership of General Armstrong, who founded the University back in 1868, he had the vision and foresight to establish a museum and in fact the Hampton University Museum is the oldest African American Museum in the country and has one of the largest African American collections in the country,” Tuck said. “When Dr. Harvey came here in 1978, and in his book ‘Principles of Leadership,’ he talks about the fact that Hampton University had a number of financial challenges, but his vision was still to have a cultural center, a community for Hampton University students and so he kept the Museum.”

The week-long conference and culminating White Party gave participants chances to collaborate, learn about other museums, talk with each other, and make life-long friends. “Because of the richness of the history of which we have, it was important for us to connect with those who had gone through the same struggles as us starting an African American museum, as well as connecting those who are going through the struggle of telling their story,” said Rosalind Withers, Executive Director and Founder of the Withers Collection Museum and Gallery in Memphis, Tennessee.

The White Party was a true success, as well as the 40th Conference of the Association of African American Museums. “Thank you to Hampton University, specifically to the Museum here on campus and Dr.Thaxton-Ward for all that she did, and the Host Committee did to welcome us and have a really professional, organized and still friendly and really lovely conference for us, so thank you to the University and congratulations on their anniversary,” said Carter. 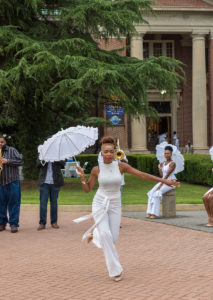 How is Kyrie Irving taking more heat than a former athlete who committed embezzlement?