DOVER, Del. – DSU held its 2017 December Commencement on Dec. 16 in the Memorial Hall Gymnasium where more than 240 graduates received their diplomas recognizing the completion of bachelor, master and doctoral degrees.

The keynote speaker was Steve Ewing, CEO and president of the Wade Ford Franchise Smyrna, Ga., and a DSU alumnus – Class of 1983. He told the Class of 2017 his story of his career challenges – in which his first dealership failed. He noted that there are many reasons for failure, but no excuses.

“Sometimes a setback is only an opportunity for a comeback. So keep your faith,” Mr. Ewing said. “It will test your resolve. Take the lessons from the failures and turn them into stepping stones for the next venture or opportunity.”

Mr. Ewing noted that the company one keeps is important. “Make relationships in your life with people who are doing positive things. Get away from negative people,” he said. “If you can get people around you who want you to win, you cannot fail.”

Mr. Ewing assured the graduates that opportunity awaits them. “People retire every day, and you have to backfill those jobs,” he said. “And coming out of this school, you are equipped to do so.”

State Sen. Bushweller has represented his Dover-area (17th District) constituents since 2008, a constant champion of economic development and improving both public and higher education. He has also been an effective advocate for DSU throughout his elective tenure, serving as an instrumental champion of the state-funded Inspire Scholarship for DSU, of capital expansion funding that led to the construction of the Optical Science Center for Applied Research, as well as of Del State’s enrollment of Dreamers (undocumented immigrant students).

Currently the Democratic Caucus Majority Leader, and the only African-American woman ever elected to the State Senate, Margaret Rose Henry is capping off a lifetime career of public service, including management positions at Delaware Guidance, Girls Inc., Ingleside Homes, YWCA, United Way of Delaware, and assistant dean of students at Delaware Technical and Community College.

Like other universities, DSU awards a small number of honorary degrees each year to recognize outstanding contributions to the institution, higher education, and society.

Much to the surprise of the DSU president, DSU Board of Trustees Chairwoman Wilma Mishoe took over the podium to present Dr. Williams with an Honorary Doctor of Humane Letters

Dr. Harry Williams will leave DSU in January to become the President and CEO of the Thurgood Marshall College Fund. His eight-year tenure as the University’s 10th president has been marked by rapid growth in the institution’s enrollment, research portfolio, international partnerships, and its footprint across Delaware.

Six times in those eight years, the University broke enrollment records, including in the semester 2017 when DSU reached 4,648 students. The dramatic expansion of DSU research was punctuated by the recent announcement of a school-record $10.9 million award for neuroscience research.

During Williams’ presidency DSU also became the only institution of higher education in the State to charter a high school, the Early College High School, where students can earn up to 60 college credits as they earn their diplomas. The first senior class graduates this spring. 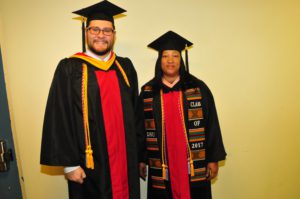 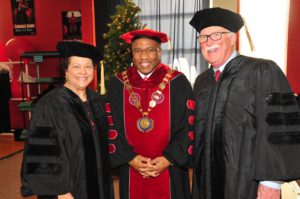 Honorary Doctor of Humane Letters Degrees were awarded to (l-r) State Sen. Margaret Rose Henry, DSU President Harry L. Williams and State Sen. Brian Bushweller. When this pre-Commencement photo was taken, Dr. Williams did not yet know that the DSU Board of Trustees would be surprising him with an honorary degree. 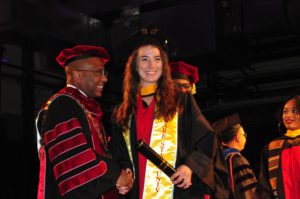 Brittany Marie (r) Clymer of Newark, Del. – being congratulated by DSU President Harry L. Williams – was one of more than 240 graduates who received their diplomas on Saturday at Delaware State University.