DSU faculty and graduates figure greatly in the development and passage of House Bill 311 – which hold all social workers to a higher competency standard.

DOVER, Del. — While Delaware may be known as the First State, its oversight of the licensing of social work practitioners was hardly that – in fact, it lagged behind the standards set by most other states in the country.

That is, until a retired DSU social work assistant professor and some current Del State social work faculty members and graduates made it their mission to help ensure that social workers are held to a greater competency standard to do the professional work in the field.

Prior to HB 311, only clinical social workers were required to be licensed in Delaware. The new law now requires a three-tier licensing system that includes both clinicians, as well as graduates who have earned bachelor’s degrees and master’s degrees in social work prior to working professionally in the field.

With DSU possessing the only accredited social work program in the First State, its faculty – retired and active – played an especially instrumental role in crafting the details of the legislation and getting the state of Delaware to do the right thing. There were also DSU social work alumni, now professionals in the field, who were involved in the work.

The legislative success was the combined efforts of the Delaware Chapter of the National Association of Social Workers NASW-DE) and the Delaware Board of Clinical Social Work Examiners – both highly represented by DSU social work faculty and graduates.

And as if that weren’t enough, state Rep. Stephanie Bolden, a DSU alumna, was the primary sponsor of the bill that will take effect in May 2019.

Sen. John Walsh, a bill co-sponsor, gave great credit to Dr. Saunders for the legislative victory. “Dr. Marlene Saunders championed this bill and got it to the finish line,” he said.

After Dr. Saunders’ retirement in 2014 from teaching, she focused her time on improving the social work standards in the state. As the NASW-DE executive director, she spearheaded a subcommittee that included Dr. Franklin, Dr. Kingsberry, DSU social work alumnus Philip Thompson and Norwood Coleman Jr. Over the course of a number of years, the subcommittee met frequently with the state Division of Professional Regulations, the General Assembly’s Joint Oversight and Sunset Committee, the state Office of Management and Budget, as well as other legislators to educate on the need, to hammer out the new licensure system and get it into legislative form.

Prior to becoming law, HB 311 unanimously passed both the State House of Representatives and State Senate.

With its passage, future DSU social work graduates in the future will have to prepare to pass the licensure test, similar to the testing hurdle that nursing graduates face to begin their careers. Dr. Franklin said the department is already working to ready its students for the post-graduation exam.

Dr. Saunders – who prior to her retirement was recognized by her state peers as the 2008 Social Worker of the Year – noted that now Delaware is the 34th state in the country to legislatively put such regulations in place for social workers.

“This legislation is important because it is the best way to protect the public by ensuring safe, ethical and competent practice by all social workers,” Dr. Saunders said. “The NASW Chapter of Delaware is very appreciative of the support given by Rep. Stephanie T. Bolden and Sen. John Walsh.”

She added that special recognition must be given to the Delaware Board of Clinical Social Work Examiners – the regulatory body for social workers – for providing the guidance that led to the bill’s passage and enactment. 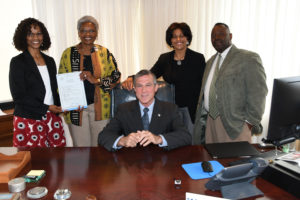 Gov. John Carney poses with the NASW-DE subcommittee – all DSU folks – who were instrumental in the passage of HB 311. Standing from l-r: Dr. Sheridan Kingsberry and Dr. Marlene Saunders holding the signed legislation, along with Dr. Fran Franklin and Philip Thompson.