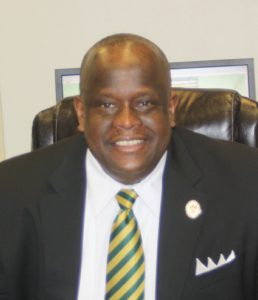 Most recently, Mr. Boyle was the vice president of Enrollment Management for Wiley College in Marshall, Texas from March 2016 to present. Prior to that, from November 2014 to March 2016 at Wilberforce University in Ohio, he served in a similar position initially and then was elevated to senior vice president of Enrollment Management and Student Services.

Interim DSU President Wilma Mishoe, who has worked with Mr. Boyle in the past, said he is a welcome addition to the University.

“He is extremely knowledgeable about enrollment management and found him to be a man of integrity,” Dr. Mishoe said. “He is student success driven.”

The new vice president for Strategic Enrollment believes he will be a good executive fit at DSU.

“Being a part of a land-grant Division I institution and playing a leadership role in helping the school achieve its mission of serving students is what excites me about coming to DSU,” Mr. Boyle said.

Mr. Boyle has a Bachelor of Science degree in General Business (1990) and a Master of Business Administration (1998), both from Alabama A&M University. He has also earned certificates from the Management Development Program and Institute for Management and Leadership, both at Harvard University.

In addition to his higher education experience, Mr. Boyle had the distinction of competing as part of the Barbados Swim Team in the 1987 Pan American Games and the 1988 Summer Olympic Games in Seoul, South Korea.