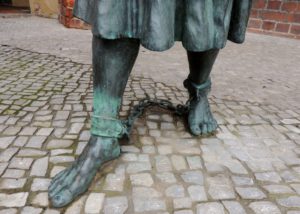 What can you learn from a convicted felon that treads the halls of one of the most notorious prison facilities across the globe? A lot more than you’d imagine. The fact of the matter is a disproportionate amount of the inmates lassoed into the penal system committed crimes related to money. Burglary, robbery, larceny, extortion, the list goes on.

America has a huge problem with money. The formidable “red, white, and blue” country constructed upon the infrastructure of “financial prosperity” (capitalism), yet 57 percent of the nation can be characterized as financially illiterate. Money controls our access to food, water, transportation, social status, justice, and living conditions. Poverty is perhaps “the biggest threat to public safety”. If you can’t earn money within our system, you’re tempted to steal it.

Over the past week, I had the opportunity to watch one of the most remarkable TED Talks that I’ve ever personally witnessed. I gazed in amazement as I watched a convicted felon grace a full audience of people with intelligence, confidence, and exemplary diction. It was nothing short of outstanding. And he was talking about one of America’s biggest problems: money.

Curtis “Wall Street” Carroll grew up in Oakland, California, a city known for its high crime and poverty rates. Growing up in an unconventional environment, Carroll found financial security by stealing. Over time, the scale of his heists grew and one day he got caught. At 17 years old, he was sentenced to 54 years to life in prison. Another African-American male in the system for a crime related to none other than the “dolla dolla bill”.

He walked into the pen as an illiterate. He’d trotted through the school system without learning the basic fundamentals of education. But one day, a fellow inmate read the business section of the newspaper to Carroll and the first domino had finally fallen. That day, Carroll became enamored with the concept of investing.

In a couple years, Carroll learned how to read and began studying the stock market. The asset class that made “white folks” rich. The more he learned about the financial markets, the more he realized that he’d been thinking about money from the wrong vantage point. And so had many of his peers in jails across the nation.

But as Carroll continued to dig through the archives of financial prosperity, he noticed that money was not only an issue amongst the poor in high-crime, low-income neighborhoods like Oakland, but rather it was a national epidemic. According to MarketWatch, 62 percent of Americans have less than $1,000 in their savings. 20 percent don’t even have a savings account. If people on the outside can’t manage their money, how can released felons go back into the world as “second-class citizens” and become financially stable?

With this in mind, Carroll developed a curriculum to teach to inmates the foundations of personal finance. He founded an organization called Financial Empowerment Emotional Literacy (F.E.E.L.). The vision was designed to deter inmates away from making poor impulse driven decisions and to help them create a sustainable lifestyle that generates wealth over time. He’s equipping his students with the tools necessary to become contributing members of society once they leave the penitentiary. Carroll emphasizes the importance of formulating rational judgments instead of emotional judgments, which typically lead to poor financial performance. I spoke a bit about poor spending habits in my recent post.

Think for a Second

When’s the last time that you made a poor financial decision? Perhaps Carroll’s model could have saved you some hardship. The principles are simple. The discipline to follow through causes the most difficulty. But having a system in place to lead our decisions away from irrationality makes a big difference in our pocketbooks over time. Carroll admitted to making bad decisions in his life and now he’s committing his time to helping others make good ones.

Carroll is nicknamed “Wall Street” because he spends most of his day scouring through stock research. He even has a friend on the outside executing trades for him. At 36 years old, he’s done a complete 180. If he’s able to invest while behind bars, what’s your excuse? Here are a few tips on getting started. Ready, set, go.