Hawkins-Rippie is the first Hampton University Fulbright scholar in 44 years. He was extremely active during his tenure at HU, participated in many clubs and organizations and even interned for U.S. Speaker of the House Paul Ryan. “I knew this young man would go far in his life and he’s only just begun,” said Hampton University President Dr. William R. Harvey. “I wish Jordyn safe travels abroad and know that other students at Hampton will see how much he has achieved already and believe that it is possible for them too.”

While in Malaysia, Hawkins-Rippie applied for and was accepted to attend the Harvard Project for Asian and International Relations (HPAIR) Conference that takes place later this summer. HPAIR is a five-day academic program where delegates gain exposure to multiple issues including political, social, and economic, at a global level.

“I immediately recognized it as an opportunity to bring my own personal experiences and perspectives to contribute to a global dialogue about some of the most pressing issues surrounding the Asia-Pacific region today, so I applied online, interviewed with Harvard and was accepted shortly after,” Hawkins-Rippie said. “The conference draws several hundred delegates from about 60 different countries, so it will be a true honor to represent as a delegate from the United States.”

Hawkins-Rippie is taking every opportunity he can to travel extensively throughout Southeast Asia where he’s been able to “experience a number of paradigm shifts because traveling to a place allows you to engage the people of the country and see up-close the living history of a country as well,” said Hawkins-Rippie. He has also been working with other Fulbright Scholars from various HBCU’s to try and increase conversations about getting more people of color to travel abroad during the students’ undergraduate experience. “I want to increase that exposure so that a pipeline is established for talented students who are willing to immerse themselves culturally in new environments and contribute the best part of themselves to creating understanding on a global scale,” said Hawkins-Rippie.

Hawkins-Rippie has taken an interest in international education and will continue to teach English to middle and high school students during his remaining time in Malaysia. 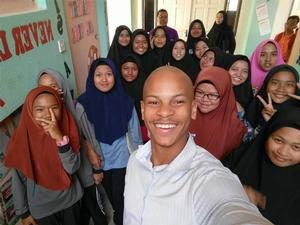 Jordyn Hawkins-Rippie with students in Malaysia

Read this article on the web by visiting:
http://news.hamptonu.edu/release/Hampton-University-Graduate%2C-Jordyn-Hawkins–Rippie%2C-Traveling-and-Working-in-Malaysia-as-Part-of-Fulbright-Scholarship »