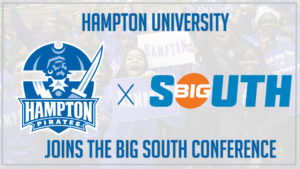 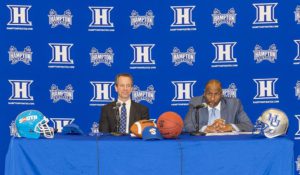 “The move to the Big South Conference is just another part of an exciting year at Hampton University,” Hampton University President Dr. William R. Harvey said. “Institutions in the Big South are located in Virginia, North Carolina and South Carolina, which means that our student athletes will spend less time traveling and more time in classes on campus. This keeps the proper focus on academics, which is our chief reason for being. The smaller geographic footprint will also reduce travel expenses. Another important consideration is the large number of alumni located in the Big South region. We have enjoyed our 22-year relationship with the Mid-Eastern Athletic Conference and hope to continue competing against some of its teams.”

“Hampton University is moving forward, and the timing is right for a new venture,” he said. “Our President, Dr. William R. Harvey, says to ‘Dream No Small Dreams,” and this is a great time to dream big.”

Big South Commissioner Kyle Kallander couldn’t be more pleased for the conference and for Hampton University.

“This is a big day for the Big South! We have always been impressed by Hampton’s academics and athletics accomplishments under President Harvey’s visionary leadership,” Kallander said. “We appreciate his interest and support of the Big South and look forward to working with him and the rest of Hampton’s leadership to support our student-athletes.   The Big South is a better conference with Hampton – athletically, academically, and in providing outstanding opportunities for our student-athletes.”

Marshall said that Hampton’s association with its Mid-Eastern Athletic Conference rivals will continue.

“We are thankful to the Mid-Eastern Athletic Conference for 22 years of great athletic competition and tremendous support,” Marshall said. “We hope to retain long-time rivalries by playing MEAC schools. We are not leaving our fellow HBCUs (Historically Black Colleges and Universities). We are expanding our reach.”

“This move enables us to better manage class time, reducing lost class time for our athletes, with the goal of high academic achievement at the forefront of HU Athletics,” Marshall said.

Kallander said that the vote to admit Hampton University was unanimous, and was based on excellent academic and athletic achievement.

“The Big South’s goal is to win,” Kallander said. “We expect them to win and to compete for championships their first season in the conference.  We have admitted Hampton University due their integrity and character.”

Hampton’s athletics history dates back to the mid-1970s and includes memorable NCAA Tournament moments in 2001 when the No. 15-seeded Pirates upset No. 2-seeded Iowa State, as well as in 2014-15 making consecutive NCAA Men’s Basketball Tournament appearances.  The women’s basketball team has won five Mid-Eastern Athletic Conference championships in a row and six in the last eight years.

On the football field, the Pirates have made five FCS Championship postseason appearances, as well as making five trips to post-season play as a NCAA Division II member.

For 150 years Hampton University has been THE Standard of Excellence in higher education. Founded in 1868 by Brig. Gen. Samuel Chapman Armstrong, Hampton University has a long successful history of offering a strong academic program of educating the “head, heart and hand,” and emphasizing the development of character.  This foundation has been built upon by Dr. William R. Harvey, who has served as Hampton’s president for 40 years, during which time the university has experienced accelerated growth and achieved notable accomplishments.

Founded in 1983, the Big South Conference is an exemplary leader in college athletics, dedicated to developing student-athletes through the pursuit of excellence in the classroom, community and field of play.  The league’s growing presence as an NCAA Division I athletic conference is made evident by its multitude of athletic accomplishments, innovative marketing and media partnerships, increased television packages and most importantly, its commitment to fostering the academic, personal, social, athletic and leadership development of its student-athletes.  Currently comprised of 10 member institutions (Campbell University, Charleston Southern University, Gardner-Webb University, High Point University, Liberty University, Longwood University, Presbyterian College, Radford University, UNC Asheville and Winthrop University, plus football members Kennesaw State University, Monmouth University and the University of North Alabama) sharing a common geographic region and similar academic values and purposes, the Big South’s remarkable history of achievement is characterized by the league’s 19 championship sports and the profound academic and life successes of its nearly 3,500 student-athletes.