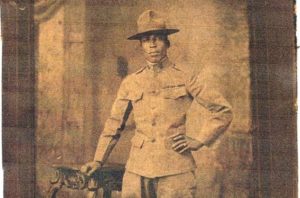 Sgt. Burrell Morris was a Buffalo Soldier, a nickname for the African-American 10th Cavalry Regiment based out of Leavenworth, Kansas. (Courtesy Jacquelyn Roberts Gardner and Maureen Elgersman Lee)

He was a soldier and a restless adventurer, but all that remains of his life is a photograph and a letter.

In the age of iPhones, Wikipedia and Facebook it can be hard to imagine just two documents remaining after someone dies, but in 1920 when Sgt. Burrell Morris wrote a letter to the father of longtime Williamsburg resident Jacquelyn Gardner, the man created what would become one of the sole remnants of his life.

The letter filled every available inch with flowing cursive detailing Morris’ romantic exploits as a Buffalo Soldier in the historic 10th Cavalry Regiment of the United States Army. 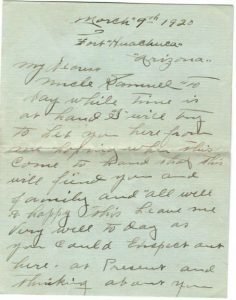 “When I read this letter, I kept it, hoping I could do something with it, to document that he was living amongst us,” Gardner explained. “It was almost like reading a little private history of this young man.”

The letter he sent from his duty station in Arizona dated March 9, 1920 has survived nearly a century in family hands, but Gardner knows paper can only last so long before it disintegrates.

Ninety-seven years after Sgt. Morris dropped the letter into the mail, Gardner handed it over to Professor Maureen Elgersman Lee of Hampton University so it could be scanned and preserved for another century.

Hampton University and the Williamsburg Regional Library recently partnered to promote the preservation of historic documents for the African-American community in Greater Williamsburg.

“People want grandma’s silver, and they want this and that, but if we can help people realize the value of papers then they can help preserve their own family history,” Elgersman Lee said. “They’re kinda on the front lines of preservation.”

Elgersman Lee heads a pilot program through Hampton University that aims to scan and digitize historic documents from African-American families in the Greater Williamsburg area, because often there are meager paper trails, she said. 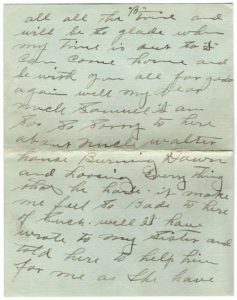 The program’s first day saw a handful of people arrive at the Williamsburg Regional Library to have their documents scanned. Participants kept their original documents, but also received a digital copy.

“The project is designed to raise awareness in the African-American community and in a broader sense as well,” Elgersman Lee said. “That it’s important to preserve documents.”

Almost all types of historic documents related to the Greater Williamsburg African-American community can be preserved through scanning and digitization. Gardner even brought in a receipt for her grandfather’s rights to fish the York River oyster grounds.

Elgersman Lee said every preserved document helps the community understand a little more about itself. 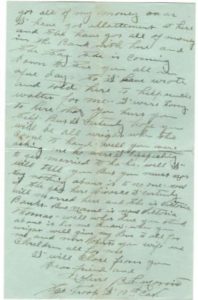 Some documents, like Sgt. Morris’ letter, are hidden for years between the pages of family bibles until their stories are rediscovered decades later.

“I found the documents in my mother’s bible,” Gardner said. “And when I saw the letter, I remembered my childhood days seeing him at my grandmother’s home.”

For more information about the project, call Hampton University at (757) 728-6853 or email Professor Maureen Elgersman Lee at maureen.elgersmanlee@hamptonu.edu.