BALTIMORE, Md.  – On a night celebrating academic excellence and achievement, Hampton University President Dr. William R. Harvey and his 40 years of unparalleled leadership, was immortalized with the creation and awarding of the inaugural William R. Harvey Lifetime Achievement Award at the 2018 HBCU Awards in Baltimore.

The award, presented by HBCU Digest, is named in honor of the legendary career of Dr. William R. Harvey, who has served Hampton University with dignity and created a monumental legacy for the past 40 years. He is among the longest sitting college or university presidents in the United States.

Dr. Harvey had the pleasure of receiving two standing ovations during the awards ceremony: the first at the announcement of the award he would be receiving, and the second after accepting the award and giving his acceptance remarks. Dr. Harvey began his remarks with a heartfelt acceptance of this once in a lifetime honor. “To the nominees, awardees, guests, my colleagues in higher education, ladies and gentlemen, it gives me great pleasure to stand before you to accept the 2018 HBCU Digest Lifetime Achievement Award in recognition of my commitment to Historically Black Colleges and Universities in my 40 years of service as the President of Hampton University,” he said.

As he continued on, Dr. Harvey spoke about HBCU Digest, which is an organization he respects immensely, and encourages others to support. “We must become more vocal and more involved in support of the wonderful work that we continue to do. This is one of the reasons why HBCU Digest is important. It gives us an opportunity to communicate with one another and work together to make HBCU’s and all of higher education better,” he said. “It gives us an opportunity to share information and serve as I have been fortunate in my life because I’ve been given the power to serve.”

Over his tenure as Hampton University President, Dr. Harvey has introduced innovations that have solidified Hampton’s stellar position among the nation’s colleges and universities. His extraordinary leadership is reflected in the growth and quality of the University’s student population, academic programs, physical facilities and financial base. During Dr. Harvey’s 40 years of visionary leadership, 92 new programs have been introduced, 28 new structures now dot the landscape of the campus surrounded on three sides by water, and the university’s endowment has grown 866% from $29 million to $280 million and growing.

Dr. Harvey has also received appointments to national boards by six presidents of the United States and led important community and educational initiatives in Virginia. Dr. Harvey has truly transformed Hampton University into a world-class leader in higher education.

Created by HBCU Digest Founding Editor Jarrett L. Carter Sr. in 2011, the HBCU Awards crowns winners in the fields of leadership, arts, athletics, research, and community engagement. “Dr. Harvey’s career has epitomized what innovation and work ethic can actualize within any organization, but particularly one with a mission mandate to support under-represented and under-resourced students,” said Carter. “The entire HBCU community is a collective beneficiary of his advocacy and example over 40 years, and we are honored to pay tribute to that legacy in at least a small way, by naming our lifetime achievement award in his honor.”

The HBCU Awards is the first national awards event to recognize the influence and impact of HBCUs on American culture. 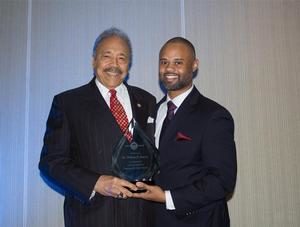 Read this article on the web by visiting:
http://news.hamptonu.edu/release/Hampton-University-President-Dr^-William-R^-Harvey-Receives-Inaugural-Lifetime-Achievement-Award-Named-in-His-Honor-at-2018-HBCU-Awards