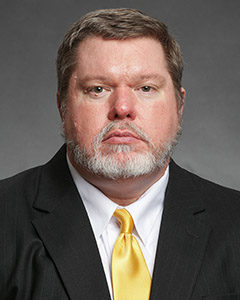 Greensboro, N.C. (May 30, 2017) — A longtime leader in IT administration in the University of North Carolina System has been named vice chancellor for Information Technology and chief information officer for North Carolina Agricultural and Technical State University, school leaders announced today.

Henry Thomas Jackson has held the position on an interim basis since April 2016, and previously served as an assistant vice chancellor of IT at N.C. A&T over the previous year. His appointment to the permanent role, which comes at the culmination of a national search, is effective immediately, said Chancellor Harold L. Martin Sr.

“Tom has provided strong leadership in bringing strategic solutions to our IT needs at North Carolina A&T over the past two years,” said Martin. “He not only made a mark on the job, but emerged from a rigorous search process as our preferred candidate, and I am delighted that he will be an ongoing member of our leadership team.”

During Jackson’s interim term, he oversaw the implementation of A&T’s academic reorganization in the Banner system, completed the rollout of DegreeWorks for the College of Business and Economics and the migration of the Blackboard system to managed hosting.

He also accomplished the launch of a multi-million dollar upgrade of technology in classrooms and computer labs, with the first phase of the project being completed this summer, and introduced improvements in campus infrastructure, including new Internet connections, additional fiber optic cabling and an upgrade of A&T’s wireless network

Prior to his service at A&T, Jackson worked in a variety of IT capacities at the University of North Carolina at Pembroke from 1993 to 2015, most notably as chief technology officer. He also taught courses in computer science and management information systems at UNCP as an adjunct faculty member.

Jackson holds a B.S. in Mathematics from UNCP, an M.S. in Computer Science from the College of William and Mary and an MBA from UNCP. He is currently pursuing a Ph.D. in Leadership Studies at N.C. A&T. He is also a graduate of the EDUCAUSE Institute Management Program.

Jackson is a member of the board for UNC CAUSE, a system-wide organization created by leaders of the 17 constituent campus IT units to exchange ideas and share information.

He previously served on the boards of the UNC Shared Services Alliance, which developed common solutions for administrative systems, and the UNC Teaching and Learning with Technology Collaborative, which promoted the effective adoption of technology to support instruction.

“It’s an honor to serve an institution with such a storied past and brilliant future,” said Jackson. “I look forward to working closely with colleagues around the university to leverage technology more fully as we work toward our goal of becoming a preeminent land-grant university.”