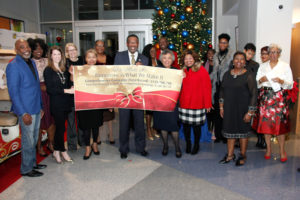 Charlotte, N.C./Dec. 14, 2017—Johnson C. Smith University is proud to announce that the Tomorrow is What WE Make It comprehensive campaign—launched in 2010 by the JCSU Board of Trustees, with a $150-million goal—has secured gifts and commitments totaling $159.4 million as of Dec. 6, 2017. This is one of the largest sums ever raised by JCSU. The campaign concluded at the close of JCSU’s 150th anniversary, with over $1 million dollars pledged for each year that the University has been in existence.

JCSU experienced broad-based support from Trustees, alumni, corporations, foundations, faculty/staff and friends in the philanthropic community. Alumni contributed $5,987,867 and Trustees raised $2,855,970 of the $159,479,683 total. Also included is a $1 million bequest from the Larry A. Griffin Family Trust and the Michael L. Griffin Family Trust. The Griffins are slated to receive JCSU’s Arch of Triumph Community Partner award in 2018. The Duke Endowment, which received the Arch of Triumph Community Partner award in 2014, contributed the campaign’s $35 million lead gift.

“It’s exciting to see the combination of support from alumni, local community members and national foundations on this record-breaking comprehensive campaign,” said Kristin Hills Bradberry, campaign consultant. “It’s also impressive to note how much of the support in this campaign has already been given, not just pledged, and is making an impact now on the lives of students at JCSU.”

“We knew that $150 million was an ambitious goal when we launched our comprehensive campaign, but we were confident that JCSU’s stakeholders and the community would partner with us to reach it,” said Shirley J. Hughes, chair of the JCSU Board of Trustees. “Thank you to the entire JCSU community, friends and supporters. Your contributions have made this the most successful campaign in the University’s 150-year history.  Most importantly, your gifts enable and encourage young women and men to pursue their dream of completing a college education. We are grateful for your confidence in JCSU’s ability to deliver a high-quality education to our students and for your confirmation of the University’s importance to the city of Charlotte.”

“I am deeply grateful to everyone who has participated in this outstanding effort,” said President Ronald L. Carter. “The success of this campaign speaks to larger hopes for a better university and a better tomorrow—a tomorrow transformed by the change agents developed, encouraged and inspired within our gates.”

How is Kyrie Irving taking more heat than a former athlete who committed embezzlement?