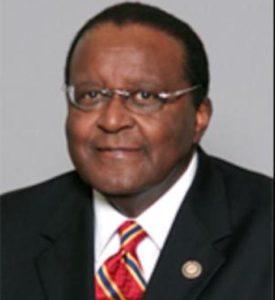 “I have lost a trusted advisor and a dear, valued friend,” said Hampton University President, Dr. William R. Harvey.  “He and I have literally traveled the nation fundraising for Hampton. Others will take on his responsibilities, but no one can ever completely replace what he has meant to our Home By The Sea and to me.”

Hamptonians, old and new alike, knew him as a kind, good-hearted, compassionate man who never met a stranger. Interim Vice President of Development Evelyn Graham, who met and began working under his tutelage in 2005, remembers his strongest trait – his positive attitude.

“He was a very positive, uplifting and encouraging person,” Graham said.

A native of Atlanta, Clark joined Hampton University in 1975 as Director of Development. His role then until now has been to find benefactors for HU, a role at which both he and Dr. Harvey succeeded by any measure.  Under Dr. Harvey’s leadership, Clark helped grow Hampton University’s endowment from $29 million to more than $260 million.

In 1998, Clark returned to his alma mater to be Vice President of Institutional Advancement at Morehouse College (’61), and his reputation for encouragement and positive attitude went with him.

“He was a pleasure to work with,” said Morehouse College Director of Alumni Engagement and Giving, Henry Goodgame. “He was always a good listener and a visionary of how things could be.”

Dr. Harvey wooed him back to Hampton University, this time as Vice President of Development, in 2001.

“He has always been a welcoming figure, a tower of strength, a wealth of knowledge, energy, expertise with a strong commitment to Hampton University and its president, Dr. William R. Harvey,” Haysbert said. “Over the years, I have found him to be a consummate professional and friend. He could be described objectively by anyone as a statesman and a gentleman’s gentleman.”

Clark enjoyed driving cars, especially BMWs, and he enjoyed growing, whether it was plants or people.

“He loved to see things grow,” said Minetta Highsmith, Administrative Assistant to Clark for 12 years,  “whether it was growing funds to support the growth and development of students through scholarships and programs or just him simply planting seeds and saplings that would eventually grow and develop into plants and food. Gardening was his joy. He would touch people through his efforts; he would hand out the fruits of his labor personally. The same way he would share the actual fruits from his garden, he would personally deliver scholarships he helped fund with the students who benefitted from them.”

Graham also remembers him as a terrific mentor.

Graham sums up the feeling on campus at the passing of a true friend to Hampton University.

“We can feel him all around us as we go forward.”