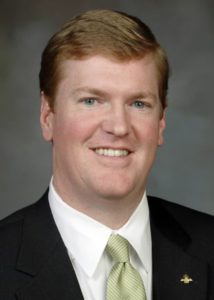 Tuskegee University has appointed William D. Ritter, an executive and senior vice president of Fortune 500 Regions Bank, as a member of the university’s Board of Trustees. Ritter, elected by the board in the fall to serve a three-year term, currently leads Region’s Wealth Management Group; oversees its private wealth management, investment services, insurance, institutional services and asset management areas; and serves as a member of the company’s Operating Committee. “Bill’s impressive experience in banking, finance and executive leadership will further strengthen the board’s ability to steward Tuskegee University’s resources responsibly,” said John Page, chair of the university’s Board of Trustees. “We know Bill’s knowledge and business acumen will help fortify Tuskegee’s thought leadership in the years to come.” Ritter becomes the second member of his family to serve as a Tuskegee trustee. His father, C. Dowd Ritter, former chief executive officer of Regions Bank, served as a trustee from 1999 to 2006. Prior to assuming his current role with Regions Bank, Ritter served as the president of its Central Region, overseeing all banking operations in Alabama, Georgia and South Carolina. He earned a bachelor’s degree in economics from Vanderbilt University, and is a graduate of the Stonier School of Banking at Georgetown. He currently serves on the board of directors for Innovation Depot and the Birmingham Museum of Art. He previously served on the boards of the Alabama Symphony Orchestra, the Birmingham Business Alliance, the Birmingham Zoo, the McWane Science Center, the Public Affairs Research Council of Alabama, and Ronald McDonald House Charities of Alabama. The Tuskegee University Board of Trustees serves as the university’s governing and fiduciary body. Its responsibilities include providing university oversight through its president, as well as helping to advance its engagement with students, parents, alumni and philanthropic donors. The board is comprised of up to 25 voting members, which includes five trustees appointed by Alabama’s governor. Board-appointed trustees serve for three years; state-appointed trustees for four years. In addition to the 25 voting trustees, there are several non-voting ex officio members, which include the university’s president, a faculty trustee who is the Faculty Senate chair, a student trustee elected by the student body, and Alabama’s state superintendent of education. For more information, visit www.tuskegee.edu/trustees.