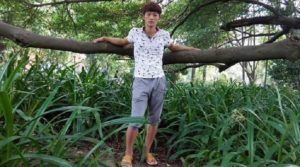 The celebratory feeling during the recent Ningbo University of Technology Commencement Ceremony was sadly tempered by the posthumous recognition and celebration of the life of Bo Wang, a NBUT-DSU joint Accounting Program student.

Mr. Wang – who was slated to graduate June 22 – died under heroic circumstances during the previous year.

During the summer of 2017 in his native Shangfeng Town, Xiushui County of Jiangxi Province, Mr. Wang and some classmates gathered during their summer vacation at a local river on an especially hot afternoon on Aug. 26. The river was higher and deeper than normal due to a rainstorm the previous day as well as from the frequent sand excavation of the river bed.

Several of the classmates fellowshipped on the shore while others waded into the river. At some point Fuhua Liu, another classmate, accidently slipped into the river and was overcome by the current. Mr. Wang and his cousin swam to her and with difficulty pushed the girl back to the shore.

About that same time, while Mr. Wang was still in the water, another child was struggling in the river. Mr. Wang, whose strength had been sapped in the rescue of Ms. Liu, was having his own difficulty in the current. Someone from the shore threw Mr. Wang an inflated life ring, but instead of keeping it for his own safety, he threw it to the child to keep him afloat.

Ultimately the child with the life ring made it back to the shore, but Mr. Wang – weakened by his efforts to rescue others – was swept away by the current. He was later found deceased a distance down river.

President Mishoe spoke of Mr. Wang during her address at the NBUT Commencement Ceremony. She noted that while Mr. Wang’s death was a tragic loss for NBUT, his enrollment in the joint Accounting Program left DSU mourning his passing as well.

“(Bo Wang) made the ultimate sacrifice of losing his life while saving the lives of two others,” Dr. Mishoe said to the graduates. “Allow Bo Wang to serve as an inspirational example of being there for others.”

According to published reports in China, his previous teachers described Mr. Wang as a warm-hearted person who was an above-average student.