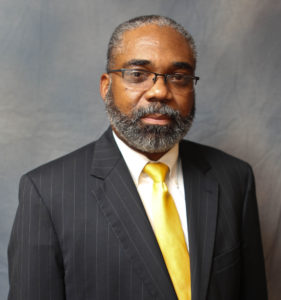 Tuskegee University announces the appointment of Harold “Kippy” Tate — a two-time Tuskegee graduate — as its new vice president for facilities and construction. Tate, who previously served in this capacity from 2012 to 2015, assumed his duties in December 2017.

In his current role, Tate will oversee all university capital projects and facilities management programs. This includes managing renovation and new construction projects, as well as monitoring the physical plant, infrastructure and staff that supports more than 100 campus buildings and spans the 5,000 acres that comprise Tuskegee’s primary campus, off-campus spaces, and other real estate holdings.

“We are fortunate to have someone of Kippy’s caliber guiding our efforts to maintain and enhance such a historic campus,” said Interim President Charlotte P. Morris. “With our current alumni fundraising priorities focused on improving the spaces where our students live and learn, Kippy’s leadership will ensure our alumni giving is devoted to upgrading our residence halls, classrooms and other campus facilities.”

During Tate’s previous tenure at Tuskegee, notable projects benefiting from his leadership included the expansion of Tompkins Hall; construction of the James H.M. Henderson Hall for Agriculture and Life Sciences Teaching, Research and Extension; and the renovation of Rockefeller and Harvey residence halls.

Including his service to Tuskegee University, Tate’s career has spanned more than three decades of experience in higher education, governmental and private practice. Before his most recent appointment as the Montgomery Housing Authority’s director of real estate development, he served as vice president for buildings and grounds at Alabama State University. His notable ASU capital projects included the construction of its new $65 million football stadium, the J. Garrick Hardy Student Services Center, and the student housing complex, in addition to the construction and renovation of other athletics, library and housing facilities.

As director of the State of Alabama Building Commission, Tate enforced state building codes, administered construction projects statewide, and collaborated with university construction-management administrators throughout Alabama to guide certain contract and construction elements of their campus improvement projects. On behalf of Birmingham-based firms McKissack and McKissack Architects, and Gresham, Smith and Partners Architects, he supervised teams and consulted with clients throughout the U.S. as a project manager and principal-in-charge.

Tate earned both a bachelor’s in architectural science and masters of architecture from Tuskegee University. For more than a decade, and concurrent with his other professional service, he served as an adjunct instructor in the university’s Robert R. Taylor School of Architecture and Construction Science. He is a licensed Alabama architect and a member of the America Institute of Architects. Currently, he serves as a member of the Montgomery Planning Commission.