A new means of detecting the most aggressive and fatal form of breast cancer — developed by a team led by Tuskegee University researchers — holds the potential to earlier detection and more informed treatment decisions.

Dr. Clayton Yates, a professor of biology and director of the university’s multidisciplinary Center for Biomedical Research, has published the team’s findings in the current edition of PLOS ONE.

This breakthrough, detailed in the article “AR Negative Triple Negative or ‘Quadruple Negative’ Breast Cancers in African-American Women Have an Enriched Basal and Immune Signature,” expands upon the three biomarker-based methods currently used to subtype breast cancer by creating a fourth testing marker.

“Scientifically speaking, our research suggests that the expression of the androgen receptor (the receptor for testosterone), should be added to the current set of prognostic markers — estrogen, progesterone and human epidermal growth factor receptor 2 — used to test for classify and determine the aggressiveness of breast cancer,” Yates said.

“The addition of androgen receptor as a fourth biomarker could be game-changing, in not only how we treat all patients with TNBC, but really sets the foundation for this unique subtype called QNBC,” said medical oncologist Dr. Windy Dean-Colomb, who serves as medical director of oncology for St. Patrick CHRISTUS Hospital in Lake Charles, Louisiana.

“As with any fight, you have to know your enemy. Imagine going into battle not knowing if you needed a BB gun, a shotgun,or a bazooka,” Yates said. “With this additional testing option, physicians will be able to better define the enemy and develop a more precise treatment plan. This, in turn, promises to be more effective for the patient — not to mention safer and less expensive — in the long run.”

Breast cancer currently is the second-most common cancer among U.S. females. The new testing method shows significant promise for detecting the most aggressive types of breast cancer — especially among African-American women. Black women are more likely than white women to be diagnosed at later stages in life, and they are 40 percent more likely to die from breast cancer after their initial diagnosis.

“Study after study proves that early detection is the key to long-term survival,” Yates said. “Our new testing method shows significant promise for as a prognostic marker for the most aggressive types of breast cancer — African-American women that lack AR expression are diagnosed 10 years earlier than patients with positive AR expression.”

“By collecting, analyzing and interpreting the genetic data available to us, we not only are able to validate our findings, but go further in researching how to best match cancer treatments to specific genetic factors,” said Dr. Davis.

Much of the data the team analyzed came from partnering universities and medical schools that include Dr. William Grizzle at the University of Alabama at Birmingham.

“Understanding the genetic factors involved is critical,” Yates pointed out, “as this information will allow physicians to rely less on debilitating chemotherapy and more personalized therapy solutions to specific patients’ needs.

“The future of cancer treatment is found in the patient’s genome, and this test will advance medical and pharmaceutical efforts to possible drug therapies targeting a patient’s specific cancer subtype and genetic makeup,” Yates continued. “Both are required to engage a patient’s own immune system to aggressively fight this fatal disease.”

“The fact that we were able to identify that African-American women have a unique enriched basal-immune signature creates the impetus for identifying targeted therapies for use in this patient population. It is our hope that the use of this ethnicity-directed clinical data will be used in a larger framework to help address some of the breast cancer-related disparities we see in African-American women” said Dr. Dean-Colomb.

Support for this research effort comes through the National Cancer Institute’s Comprehensive Partnerships to Advance Cancer Health Equity (U54) program. The findings of this research underscore Yates’ long-term research on existing health disparities, especially for cancer patients of color.

“Most people accept that health disparities exist, but for a long time, those disparities have been linked to socioeconomic issues,” Yates noted. “Research like this underscores that ethnicity and genetics — more so than income or geography — should be considered when diagnosing patients, and those same ethnic and genetic markers can allow us to tailor treatments to those illnesses.”

Yates indicated the next step for this laboratory-proven testing method is to obtain approval from the Food and Drug Administration to conduct clinical trials with current breast cancer patients. He also looks to expand his team’s data collection and analysis globally through his network of international research partners and collaborators. Ultimately, he hopes to see the test become part of standardized care for the detection and treatment of breast cancer. 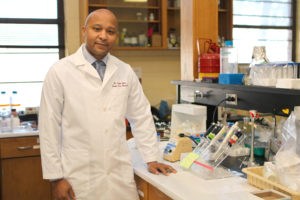 The Public Library of Science (PLOS) was founded in 2001 as a nonprofit organization to accelerate progress in science and medicine by leading a transformation in research communication. Its suite of online, peer-reviewed journals spans the scientific and medical spectrum, and its open access format makes its published articles immediately and freely available to anyone. PLOS believes that openness describes not just free and unrestricted access to research, but also open data sharing, transparency in peer review and an open community approach to science assessment. For more information, visit www.plos.org.

Located in Tuskegee, Alabama, Tuskegee University is a private and state-related land-grant institution that serves a racially, ethnically and religiously diverse student body of 3,100-plus students. The institution was founded in 1881 by Booker T. Washington and is one of 101 historically black colleges and universities (HBCUs) nationally. Accredited by the Southern Association of Colleges and Schools Commission on Colleges since 1933, Tuskegee’s academic programs — many accredited by their respective accrediting bodies — currently lead to 41 bachelor’s, 16 master’s and six doctoral degree opportunities. Recently, U.S. News and World Report ranked Tuskegee sixth among HCBUs nationally, first among Alabama HBCUs and second among all Southern regional universities in Alabama. For more information about Tuskegee University, visit www.tuskegee.edu.